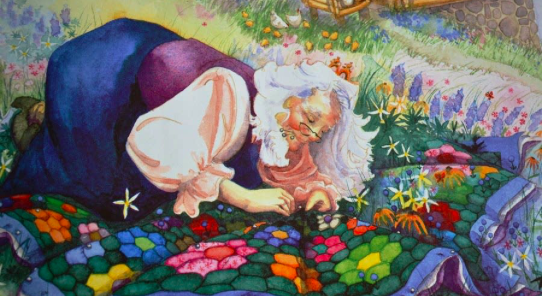 Every holiday season there’s an almost frenzied conflicting focus on acquiring and sharing, getting and giving. Help bring the joy of generosity into clearer focus for younger kids with the help of these nine children’s picture books.

The Quiltmaker’s Gift by Jeff Brumbeau. 2000. (48 pgs) Gr. 1-5.
A seamstress makes beautiful quilts and gives them people who are poor and needy. When the greedy king demands one of her quilts, she agrees to make him one – once he has given away all that he has.

Mama Panya’s Pancakes by Mary Chamberlin. 2006. (32 pgs) Gr. K-3.
Adika is so excited that his mother is going to make pancakes that he invites all his friends. Mama worries; will they have enough to feed everyone?

Sam and the Lucky Money by Karen Chinn. 1995. (32 pgs) Gr. 1-4.
It’s Chinese New Year and Sam is excited to spend his money in any way he wants. There are so many things to tempt him, but when he encounters a homeless man, Sam starts to gain a new insight about his “lucky” money.

Stone Soup by Heather Forest. 1998. (32 pgs) Gr. K-3.
A modernized retelling of the classic tale about travelers who declare they can make soup from a stone.

Brother Juniper by Diane Gibfried. 2006. (32 pgs) Gr. K-2.
When the friars return from a trip & discover that generous Brother Juniper has given away the entire church to those in need, they’re furious…until the true consequences are revealed.

The Present by Bob Gill. 2010. (32 pgs) Gr. K-3.
Arthur tries to guess what’s in the present hidden in the closet, until a visitor arrives & Arthur discovers the best gift of all.

When Stories Fell Like Shooting Stars by Valiska Gregory. 1996. (40 pgs) Gr. 1-3.
Two fables about resolving conflict, one focusing on the consequences of greed, the other exemplifying the benefits of generosity.

The Lady in the Box by Ann McGovern. 1997. (40 pgs) Gr. 2-5.
When two siblings discover a homeless woman living in their neighborhood, they discover how easy it can be to make a difference in someone’s life.

The Can Man by Laura Williams. 2010. (40 pgs) Gr. 1-4.
When Tim notices the homeless “Can Man” making money by redeeming cans, he decides to earn money for a skateboard, until he has a change of heart.