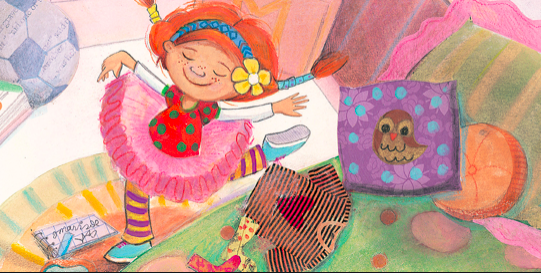 Even we adults struggle with our identity, so imagine how challenging it is for children, in a world full of mixed messages, stereotypes, and media and cultural pressures.

Thunder Boy Smith, Jr., loves his dad, but he doesn’t love being named after him. “Can I tell you a secret? … I Hate My Name!” Little Thunder, as he’s called, wants his own name – “I want a name that sounds like me. I want a name that celebrates something cool I’ve done” — and spends much of the book dreaming up possible new names, based on his passions and imagined adventures.

Morris Micklewhite loves to imagine himself exploring outer space or visiting far off jungles with elephants and tigers. Morris also loves to wear the tangerine dress and heels in the dress-up area of his classroom. When his classmates won’t play with him anymore, Morris plays on his own, using his fantastic imagination. When the other children see the fun Morris is having, they decide that having a good explorer for a friend is far more important than worrying about what he is wearing.

Marisol McDonald doesn’t match, and for a very good reason: she doesn’t want to! She eats peanut butter and jelly burritos, wears stripes with polka dots, has brown skin and red hair, and sees no problem with a good game of soccer-playing-pirates. When Marisol tries a day of being like everyone thinks she should be, she realizes that she’s wonderful just the way she is.

Mike is a perfect blend of his two parents. Mike celebrates the mixed world he lives in, but his friends have questions, like why don’t his parents match? With confidence and joy, Mike celebrates his mix and lets everyone know that he is not Mixed-Up, just mixed.

It was clear to everyone that something was not right with Red. Red’s strawberries were blue. When Red tried to make orange with Yellow, it came out all wrong. Most assumed Red needed to try harder. Others thought Red was a slow learner, and that Red would get there eventually. Then Red met Berry, who asked him to draw jeans and oceans, and everyone realized Red was really Blue.

Do you have feedback about our content? We’d love to hear your thoughts. Let us know by leaving us a comment below or by emailing us at info@humaneeducation.org.