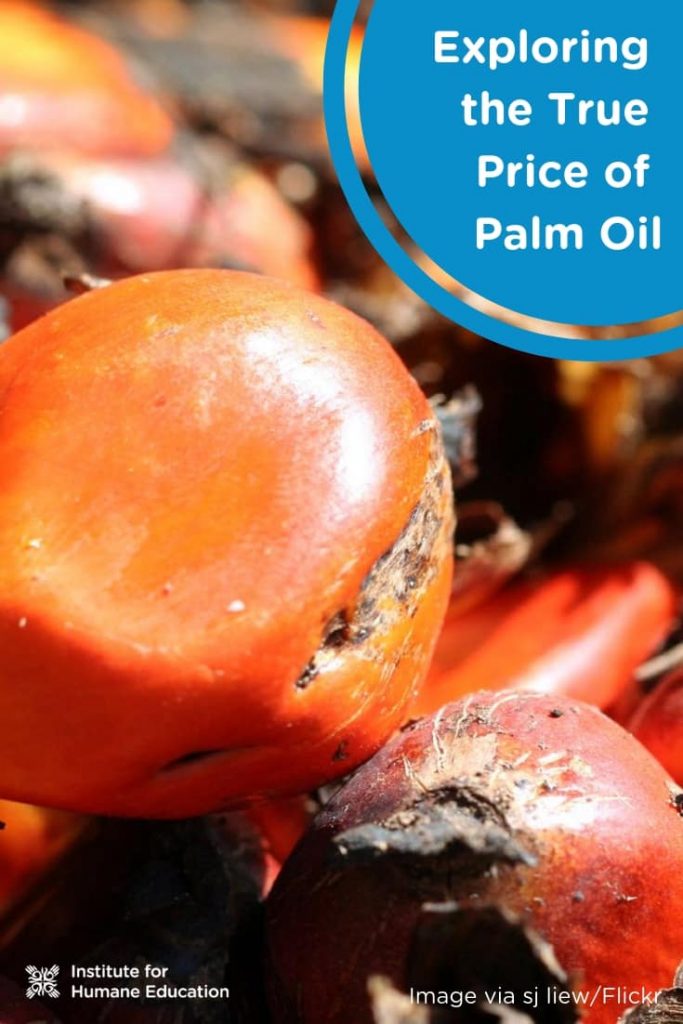 Look in your shopping cart, and you probably see soap and other beauty products, baked goods and other processed foods, perhaps some cleaning products.

What you don’t see is that about half those products contain palm oil, which means they are contributing to the destruction of forests and communities, and the extermination of endangered orangutans and tigers, and other wildlife.

In fact, according to a 2018 editorial, orangutans in parts of Indonesia are on the verge of extinction, as companies burn them and their habitat to make way for palm oil plantations.

What is palm oil?

Palm oil is an edible plant oil derived from the fruits of palm trees (it’s extracted from the pulp of the fruit).

It’s a popular cooking oil in Africa and Southeast Asia, and it’s increasingly popular as an ingredient in thousands of food, beauty, and other products, including biofuels.

Palm oil has become such a lucrative and coveted commodity that millions of acres of rainforest and peatlands in countries like Indonesia, Malaysia, and Nigeria have been burned and torn down to create commercial palm plantations.

Why is palm oil so popular?

In addition to the jobs created by palm oil plantations and production, palm oil is in high demand for several reasons.

It’s highly versatile, so it can be used for hard, semi-solid, and liquid fats and oils. It’s cheaper to produce than some other kinds of oils.

It doesn’t contain trans fat, so it’s very useful for companies that make processed foods. And palm oil is a popular component of biofuels.

The Effects on People, Animals, and the Earth

While palm oil is a convenient product and a lucrative commodity, its negative effects on people, animals, and the Earth are many. Here is just a sampling:

What can we do?

We can choose not to buy products that contain palm oil, but since companies are going to rely on some sort of oil to do the job they want, boycotting may not be the most effective choice. Here are three actions we can take to help do more good and less harm:

Greenpeace UK. “How the Palm Industry is Cooking the Climate.” Report. 2007.

Thompson, Claire. “The Push for Sustainable Cookies Isn’t Over Yet.” Grist. 7 February 2012.