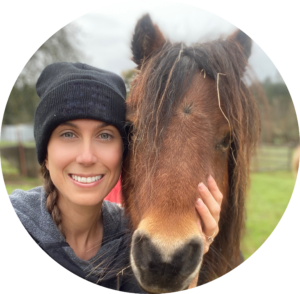 It started with earthworms. While other kids played with Barbie Dolls and Tonka Trucks, I played with annelids and insects. I quickly became Highmount Avenue’s resident animal rescuer. Neighbors would call my mom if they found injured butterflies, baby birds, or snakes. As my rescue services became better known, we had to convert our downstairs bathroom into a makeshift rehabilitation center, filled with creatures in need of a helping hand. The derogatory nickname I was given by my classmates in elementary school (which I later reclaimed as a badge of honor) was ‘bug girl’. There were times when I ran to the principal’s office in tears after I had seen schoolmates use the sun and their magnifying glasses to kill bugs on the playground. I was incensed and confused by the cruelty they inflicted on these innocent little creatures.

As my world got bigger I learned about the many systems engrained in our society which perpetuated injustice against animals, people, and the planet. My innate need to stand up for all living creatures, big and small, continued to grow with every article I read or documentary I watched. I was exploding with the desire to teach everyone what I had learned so that we could all, collectively, reform these abusive systems to create a more just and humane world. I knew my calling was to educate the next generation to become more responsible, thoughtful consumers and changemakers.

I’ve spoken to thousands of middle, high school, and college students about the impacts of factory farming on the Earth and its inhabitants. It is empowering to know that as I foster empathy and awareness in young people, I can help create a more just and sustainable world in which fewer animals will suffer at the hands of humans. Everyone cares about something, and I aim to tap into people’s passions to drive them to action.

Claudia is the Marketing and Social Media Specialist for IHE with the goal of increasing enrollment in IHE’s Graduate Programs with Antioch University and IHE’s Solutionary Micro-credential Program, growing IHE’s social media following and engagements, and bringing IHE’s programs, free resources, and Solutionary Framework to the attention of educators and changemakers worldwide.