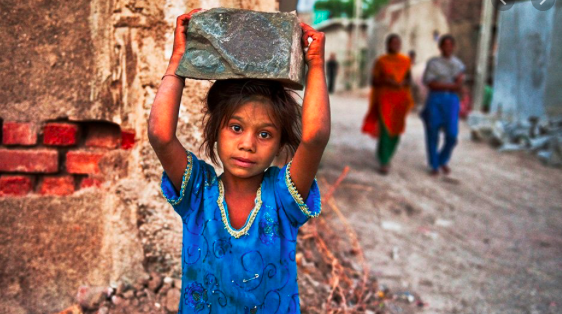 “The change starts within each one of us, and ends only when all children are free to be children.” ~ Craig Kielburger

Have you recently purchased a soccer ball? Something embroidered? Something made from cotton? Chocolate? Clothes? Produce?

If so, there’s a good chance you’ve purchased something made from child labor.

Child labor and slavery are so entrenched in the production of goods and services from so many countries, that it can be an enormous challenge to avoid it.

It’s estimated that more than 200 million children around the world are engaged in child labor, and almost half of those (ages 5-17) are involved in some sort of hazardous or dangerous work.

Although we have to be mindful about how and when we introduce children to certain global issues, such as child labor and slavery, books like these are a useful age-appropriate segue into learning about child labor issues and discussing how to help.

1.  Iqbal by Frances D’Adamo
2003. Grades 4-7.
Iqbal: A Novel is a fictionalized account of a real life hero, the courageous Pakistani boy Iqbal Masih, who fought for the freedom of child slave laborers. The story is told from the point of view of Fatima, whom Iqbal meets when he is sold to a man to weave carpets.

2.  Hidden Girl: The True Story of a Modern-Day Child Slave by Shyma Hall
2014. Grades 7-12.
Sold to a wealthy family in Cairo when she was eight, Shyma serves her owners night and day. When they move to California, she is smuggled along. Although she is freed when she is 12, she has a whole new set of problems: she’s uneducated, illiterate, and alone.

3.  I Am a Taxi by Deborah Ellis
2006. Grades 5-8.
To help make money after his parents are falsely imprisoned, Diego works as a “taxi” running errands. When a friend lures him with promises of a well-paying job, he ends up working in the jungle for cocaine smugglers.

4.  Chained by Lynne Kelley
2012. Grades 4-7.
In order to help his sick sister and to protect his mother from an abusive employer, Hastin gets a job as an elephant caretaker in a circus. But as soon as he arrives at the circus, he knows he has made a terrible mistake. His boss, Timir, has a temper and wants Hastin to help him trap a wild elephant for the circus.

5.   Yasmin’s Hammer by Ann Malaspina
2010. Grades 1-5.
Yasmin and her sister spend their days working hard in the brickyards to help make money for their family. Yasmin dreams of going to school so that she can have a better life (“… I don’t want to sweep a rich lady’s floor”), and decides to take action herself to help her dream come true.

6.  The Carpet Boy’s Gift by Pegi Dietz Shea
2003. Grades 2-5.
A young boy who labors in a carpet factory is inspired by former child slave Iqbal Masih and summons the courage to fight for his freedom and lead the children in the factory to the new school in town.

7.  Boys Without Names by Kashmira Sheth
2010. Grades 4-8.
His family enduring hard times, Gopal is kidnapped and forced to work with other boys in a sweatshop factory to made beaded picture frames. Gopal is determined to escape.

8.  Taste of Salt by Frances Temple
1992. Grades 8-12.
Djo is in the hospital, after a terrible beating. There he tells his story to a young woman, Jeremie. His life has included leaving a poor home, teaching reading to younger boys, and being kidnapped to work in the sugar fields of Haiti.

9.  Malala: A Brave Girl From Pakistan by Jeanette Winter
2014. Grades 1-4.
This book uses simple phrases and colorful illustrations to tell the story of Malala, a brave activist fighting for education and freedom for all children. The story includes actual quotes from Malala and treats the violence done to her with care.