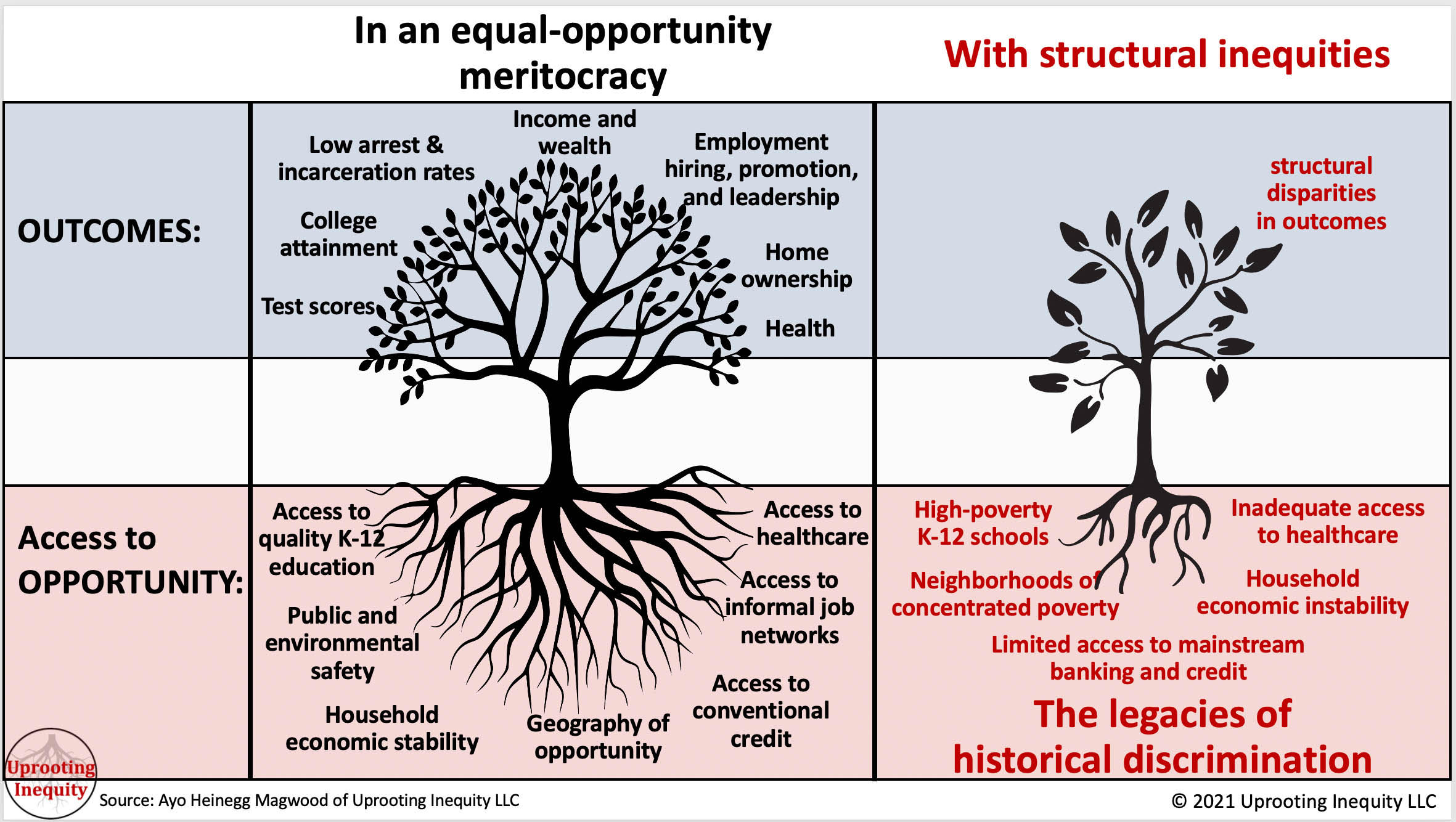 How to use the solutionary framework in polarized times

Co-authored by Ayo Magwood, Founder of Uprooting Inequity, and Zoe Weil. Ayo is an educational consultant specializing in evidence-based education on historical and structural racism for adults and students. She is working on her book The ProEquity Framework: Teaching Honest, Appreciative, and Civic-Minded U.S. History. Visit her website for more resources.

It’s been more than a year since the backlash against teaching U.S. students about racism began. Many administrators have borne the rage of (mostly) White parents angry because they perceive that their children are being taught they are racists (even though this is not what teachers have been doing). Many states have passed laws to prevent any instruction in schools about historical or structural racism.

As the new school year begins, it’s crucial that we not shy away from teaching about our history of racism honestly, accurately, and with a solutionary approach in mind so that we can address its continued consequences and build a society in which everyone has the opportunity to thrive. Toward that end, we offer five approaches to teach about historical and structural racism through an evidence-based, solutionary framework.

1. Use evidence-based inquiry to trace the historical roots of contemporary structural racism.

Structural racism refers to policies, practices, and entrenched norms that result in racial disparities in treatment and access to opportunity. Examples of structural racism include the enduring legacies of the historical wealth gap and the hyper-segregation of low-income African Americans in neighborhoods of concentrated poverty with poor access to opportunity. To be clear, outcomes are the product of a combination of factors that include individual effort, merit, and sheer luck, and are not solely determined by structural inequities; however, structural racism is highly influential in determining outcomes.

Contemporary racial wealth gaps are in part the legacy of the exclusion of African Americans from centuries of government investment in White families. These government benefits included college and vocational training subsidies under the 1944 G.I. Bill and subsidized mortgages made possible by the 1934 Federal Housing Administration (FHA) and the Veterans Administration (VA). While the G.I. Bill was considered colorblind, it was virtually “White only” in implementation and, ironically, actually exacerbated rather than narrowed the economic and educational disparities between White and Black Americans: Less than 2% of the $120 billion (over $1.4 trillion in 2022 dollars) the FHA and the VA spent underwriting new housing went to all non-White Americans combined.

Through inheritance and financial assistance, generational wealth continues to be a major source of today’s racial wealth gap.

Moreover, the roots of current racial hyper-segregation lie in decades of discriminatory housing policies and practices, including racial zoning, housing covenants, and White-only suburbs financed by the FHA and the VA. Today’s exclusionary zoning regulations often reinforce racial segregation patterns originated by discriminatory policies that have since been outlawed, but still persist. Consequently, historical redlining continues to be correlated with the racial makeup of neighborhoods, concentrated poverty, and low homeownership rates.

Formerly redlined neighborhoods also offer little access to high-quality public schools, which results in the education system reinforcing socioeconomic inequality instead of acting as an engine of mobility.

It’s important to be clear that those with greater privilege end up reproducing structural racism not because they are “bad” or “racist,” but because (like everyone else) they seek to maximize their own self-interests within the constraints of systems and institutions available to them.

These systemic disadvantages become more deeply entrenched over time and across generations and shape and constrain the individual choices and behavior of the urban poor, particularly low-income African Americans.

To avoid ideological conflict while teaching about structural racism, it’s important to distinguish between empirical (evidence-based) issues and policy (opinion) issues. Empirical issues have a right-or-wrong answer that can be discovered through evidence and are not subject to debate, while policy issues are a matter of opinion and should be debated.

For example, “Does structural racism exist?” is a settled empirical question based on a substantial body of studies by mainstream experts, while “What should the government do about structural racism?” is a policy question that is meant to be debated.

An “empirical vs. policy” framework allows educators to help students analyze the roots of structural inequalities while fostering deliberation across ideological differences about how to address those inequalities. This framework sets up safety guardrails around classroom discussion, as it precludes both racist claims that racial disparities are due to inherent inferiority (instead of structural racism), as well as accusations that non-Black students are racist. Deliberating policy issues also encourages productive civic discourse across ideological differences.

Research studies have concluded that data is more effective than personal narratives at demonstrating the magnitude of racial disparities and structural racism, because the focus on personal stories taps into powerful misleading cultural myths about high rates of mobility (e.g. that all U.S. citizens are equally able to achieve the American Dream). These misperceptions lead to significant underestimations of structural challenges and significant overestimations of the power of individual will to overcome these challenges.

When educators provide students with opportunities to evaluate cultural assumptions with data, it leads to better perspective-taking and solutionary thinking. For example, data demonstrates that the U.S. actually has one of the lowest levels of upward income mobility among high-income nations. With this knowledge, students can consider how to diminish the impediments to economic success for everyone.

In the Indian parable of the blind men and the elephant, a group of blind men who have never seen an elephant touch different parts of the animal – a tusk, leg, or ear – and then describe the elephant’s shape. Each man assumes that the part they touched represents the whole. The moral is that humans tend to universalize their subjective perspectives and limited experiences as the absolute truth. To relate this to structural racism, our perspectives are based on our limited experiences in largely racially and socioeconomically segregated communities. In other words, we are not only touching, but also living, on different parts of the proverbial elephant.

Once students understand the continuing legacy of structural racism and have learned to investigate and analyze the data taking positionality into account, they are poised to address racial disparities with a solutionary lens. The Solutionary Framework invites students to learn from a range of stakeholders outside the classroom and pursue careful research, constructive deliberation, and real-world problem-solving. This is a win for students and their learning, a win for classroom and school culture, and a win for the nation.

There has never been a better time to teach about structural racism.

Given the polarized society in which we live, many schools seek to avoid controversial issues. But where better than the classroom to learn how to gather empirical evidence and develop research skills to ensure accuracy? Where better than a school to learn how to deliberate and collaborate to build a nation where everyone can succeed? Happily, this way of teaching and learning also diminishes polarization and provides an important foundation for civic engagement and democracy.

Katz, R. (2015). The history of the GI Bill. American Radio Works. APM Reports. Part of the “From Boots to Books project. Retrieved from https://www.apmreports.org/episode/2015/09/03/the-history-of-the-gi-bill.

Katznelson, I. (2005). When affirmative action was White: An untold history of racial inequality in twentieth-century America. WW Norton & Company.

McGhee, H. (2021). The sum of us: What racism costs everyone and how we can prosper together. One World.

Putnam, R. D. (2020). The upswing: How America came together a century ago and how we can do it again. Simon and Schuster.

Rothstein, R. (2017). The color of law: A forgotten history of how our government segregated America. Liveright Publishing.